Home » REGIONS » Namaqualand » Holothrix filicornis near Springbok
Back to Category Overview
Total images in all categories: 11,923
Total number of hits on all images: 7,173,601 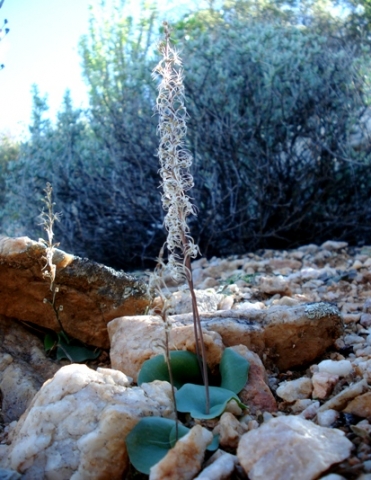 Holothrix filicornis plants, ensconced awkwardly among rocks in dry countryside, live their natural orchid lives deserving of admiration. Children of the arid northwest, these Namaqualand plants are still overcoming degradation of their habitat caused by humans. Scientifically their future is considered to be "of least concern" in plant species survival terms early in the twenty first century.

Producing seeds annually (or as close to that as possible) in a generally arid environment, is facilitated by specific features such as a small, slender growth habit, fleshy basal leaves and subterranean tubers storing moisture and nutrients through the rest season, for repeating annual floral celebrations (Williamson, 2010; www.redlist.sanbi.org).

(There are more entries of H. filicornis photos in the Holothrix Album under Genera on this Site.)