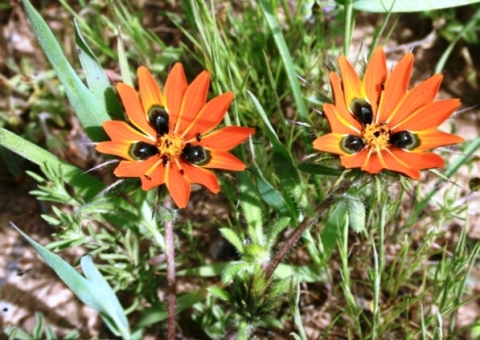 Gorteria diffusa, the beetle daisy has a deep coppery orange flower colour, more so than the ursinias or Dimorphotheca sinuata, the Namaqualand daisy. It is a smaller plant than many of the other daisies of the great spring flowering, low growing and spreading with rather small flowers, often only 2 cm in diameter, but variable in size. Subsp. diffusa has pointed petal tips, whilst subsp. calendulacea has rounded ones. The flower centre has yellow or orange disc florets. The leaves of the plant are thin and hairy.

The dark, iridescent and slightly raised markings on about three of the daisy petals resemble a kind of bee fly, Megapalpus nitidus, that is the sole pollinator of this daisy. These insects are gregarious or may just be ready for mating when attracted to flowers appearing to be already harbouring some suitable mates. Thus advertising in the form of a dating service attracts the rare pollinators to this "advanced marketer" daisy, giving it the edge over an abundance of bigger flowers via superior lures (Eliovson, 1990; Cowling and Pierce, 1999).