Home » REGIONS » Namaqualand » Moving in unison
Back to Category Overview
Total images in all categories: 11,793
Total number of hits on all images: 6,942,155 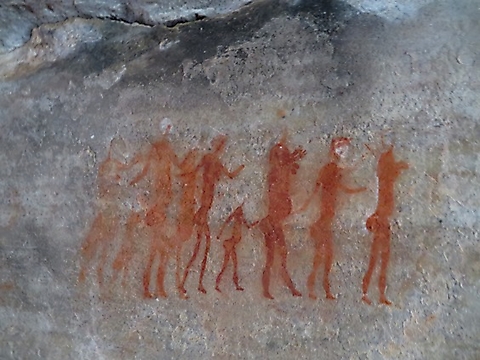 We all travel in the same direction, we live close together and close to nature, we care for our children, we care about our heads and we are concerned about losing members of our tribe.

What did this artist try to convey to people of his own time, or for those coming later? Some meanings are lost forever, but humans can recognise features of humanity in the preserved self-expression of other humans across aeons.

South African rock paintings, such as the many in the Drakensberg may be up to 2500 years old, the youngest probably only late nineteenth century. In Africa, such as the Sahara, there are works by hartebeest hunters dating back probably 10000 years ago, by cattle herders 8000 years ago and by warriors using horses and chariots over 3000 years ago.

Some older rock paintings were monochrome, different colour options only mastered later. Some skills were not maintained by all, as these were migrant, hunter-gatherer people without schools or guilds that sometimes had to relearn from scratch. Modern era people are similarly challenged periodically by new challenges such as Covid, in spite of a plethora of existing but inadequate technology. Life is like that.

What made an impression on the artist in life was to some extent reflected in his (or her?) paintings even then. Those living near Egypt painted things on rock that could be recognised from knowledge of that culture.

What a society explores in its expression of a given era reflects priorities of the times, although individuals across cultures may deviate or pursue misleading minutiae for all sorts of reasons. In other words, were these artists loners or leaders? Recurring themes tell of patterns, but one-off surprises sometimes fill chapters of comment.

Gazing at our rock paintings can be invigorating. The emerging South Africa, after a couple of decades of the 21st century, has far to go in discovering the heart, mind and searching spirit that could bind its citizens together as a nation.

Will there one day be a leitmotiv that is melodious and harmonious, representing an on-course Rainbow Nation? The discordant cacophony of wilful persistence with old tunes and blind stumblings along poorly chosen routes has to be challenged (Lhote, 1959; www.cavern.co.za).