Home » TYPES » Mesembs » Psilocaulon junceum
Back to Category Overview
Total images in all categories: 10,683
Total number of hits on all images: 5,344,372 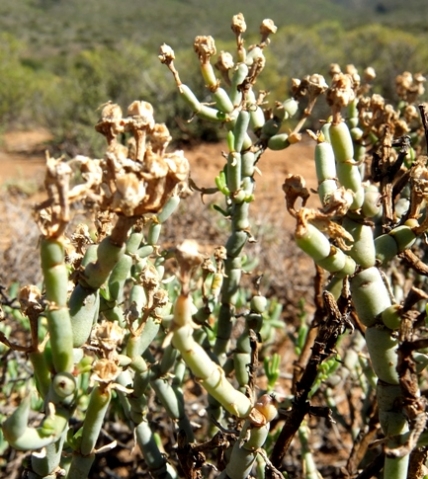 Psilocaulon junceum, in Afrikaans commonly known as asbos (ash bush) or loogbos (lye bush), is (mainly) a stem-succulent, a perennial that sprawls or grows erectly to heights around 50 cm.

The plants are common inland in semi-arid parts from Namaqualand through the Karoo and Little Karoo to the Eastern Cape. They typically grow in loamy soils in diverse lowland habitats, except fynbos. The plants are not browsed. The species is not considered to be threatened in its habitat early in the twenty first century (Vlok and Schutte-Vlok, 2010; Smith, et al, 1998; iSpot; www.redlist.sanbi.org).