Home » TYPES » Mesembs » Ottosonderia monticola
Back to Category Overview
Total images in all categories: 11,905
Total number of hits on all images: 7,156,028 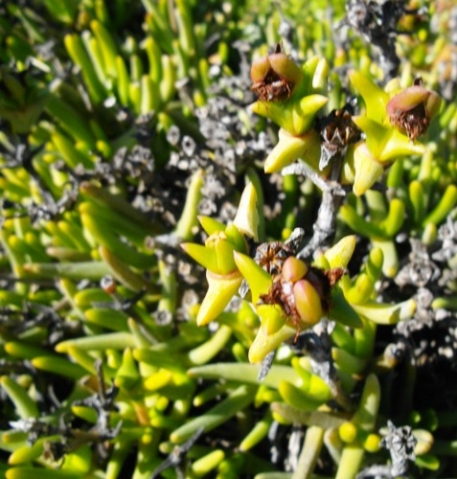 Ottosonderia monticola is one of only two Ottosonderia species in this genus, both having small distribution areas in Namaqualand. The plant is a compact shrublet with yellow-green leaves that are erect and cylindrical on spreading branches.

The curious feature of the genus is the perennially repeated functioning of the flower clusters on the same stalk. In the first flowering season solitary flowers occur on the stalks. The two fused bracts at the base of the flower each allows a new flower to emerge, subdividing again in the third season to grow the number of flowers growing from each cluster. The remains of old seed capsules can be seen along with the scars of old bracts, while new flowers keep emerging next to terminal old ones. At the base of each flower four sharp-tipped sepals are found.

The flower is purple, petals growing in two concentric whorls with a dense cluster of staminodes in the centre. The fruit has six to eight valves that open into an erect position. The capsules resemble those of the Ruschia genus (Smith, et al, 1998).