Home » TYPES » Mesembs » Oscularia deltoides being probed
Back to Category Overview
Total images in all categories: 11,506
Total number of hits on all images: 6,491,806 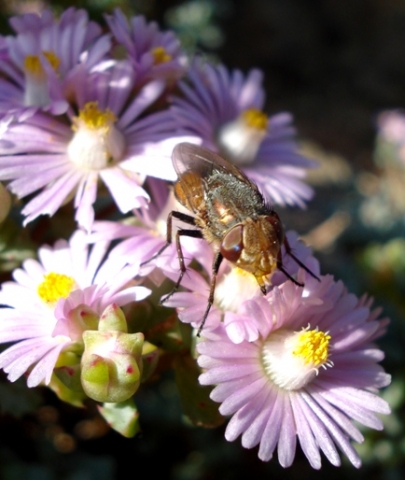 Dark green nectar glands arranged in a circle at the base of an Oscularia deltoides flower produce the tasty enticement for ensuring flower visits from the plant's designated pollinators. Insect tastes acquired and reinforced over numerous generations ensure that certain insects will keep responding instinctively to “the right” flowers.

Most flowers without their insects would be doomed to extinction without seed setting capacity; most insects without their flowers would die of hunger and disappear. Birds and even mammals (like small rodents) also perform pollination services for certain flowering plants; nature does spread risk. There are the less socially inclined flower species that self-pollinate, saving themselves the trouble of nectar production or putting trust in nobody.

Some kinds of flowers are pollinated by many species. Other plants have “agreements” varying in specific exclusivity, not bothering with spreading their risk.

The extreme case would be a plant being fully dependent on only one specific pollinator. The converse would an insect needing its diet from just one plant species that would have to flower all year round, unless the insect morphs into a non-feeding stage during some seasons or hibernates.

Many figs are in such singular mutual relationships with specific wasps. Only the wasp larva eats fig though, the wasp itself flies about having other dietary options. Mobility would be wasted on a species that gains no survival opportunities from walking, running, climbing, slithering, flying, wading or swimming (Smith, et al, 1998).