Home » TYPES » Mesembs » Oscularia deltoides flowers
Back to Category Overview
Total images in all categories: 11,506
Total number of hits on all images: 6,494,433 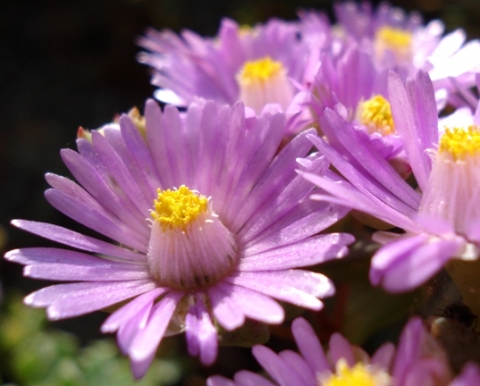 The flowers of Oscularia deltoides are produced in dense cymes near stem tips, growing on stalks from leaf axils. A multitude of stamens and staminodes (stamens that did not develop anthers), cohere in the flower centre in a cone-shaped structure. This cone has a flat top that is yellow from its many anthers.

Around the cone a ring of pale pink petals is found, round tipped and narrowly obovate to nearly oblong in shape. The petals ascend slightly, spreading widely for most of the daylight hours, closing at night. Each flower has a fleshy calyx below.

The photo taken during October shows a plant of the Nuwekloof Pass area near Tulbagh (Smith, et al, 1998; Manning, 2007).