Home » TYPES » Mesembs » Oscularia deltoides
Back to Category Overview
Total images in all categories: 10,683
Total number of hits on all images: 5,344,391 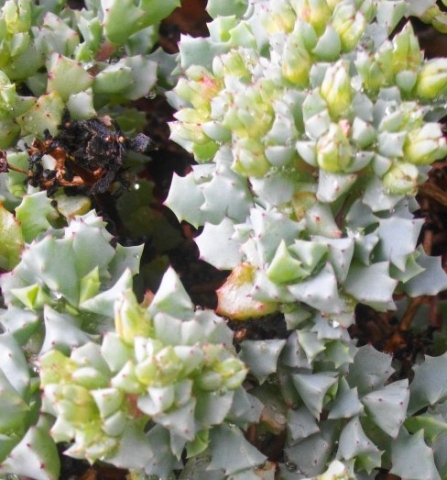 The densely shrubby mat of predominently pale, multicoloured leaves of the dassievygie (hyrax mesemb) or sandsteenvygie (sandstone mesemb), as Oscularia deltoides is commonly known in Afrikaans, range from silvery grey, green, blue to an occasional orange hue. Identification is facilitated by the pointy squat leaves that are sickle-shaped to club-shaped. The pinkish red to purplish tips or teeth spaced along the margins of the three-sided leaves also help.

O. deltoides grows in nature in the south-western part of the Western Cape.The plant grows among rocks on fynbos and scrub slopes. The species is not considered to be threatened in its habitat early in the twenty first century.

Some species of the diverse Lampranthus genus, including this one, have been moved to Oscularia some time ago (Smith, et al, 1998; Wikipedia; http://redlist.sanbi.org).