Home » TYPES » Mesembs » Oscularia cedarbergensis
Back to Category Overview
Total images in all categories: 11,506
Total number of hits on all images: 6,503,291 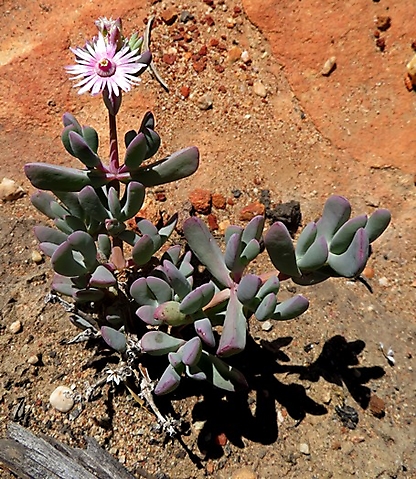 The thickly succulent leaves grow in opposite pairs that succeed each other at right angles to those above and below, making them decussate. The leaf-pairs spread or curve in slightly, together at the base but not fused. The internodes vary in length, leaving some buff, pale brown or reddish stem parts visible.

The leaves are slightly sickle-shaped and triangular in cross-section (trigonous), the keels deeper than the width of the flat upper surfaces. The leaf-tip is bluntly pointed to rounded along the keel and sometimes reddish. The blades are blue-grey, covered by a waxy layer.

The species distribution is in the northwest of the Western Cape from Clanwilliam and Wuppertal southwards to south of Citrusdal. The photo was taken east of Clanwilliam.

The habitat is rocky and semi-arid, the plants growing in the open in sandstone derived soils. The species is not considered to be threatened in its habitat early in the twenty first century (Smith, et al, 1998; iNaturalist; https://www.randomharvest.co.za; http://redlist.sanbi.org).