Home » TYPES » Mesembs » Orthopterum coegana
Back to Category Overview
Total images in all categories: 11,506
Total number of hits on all images: 6,515,965 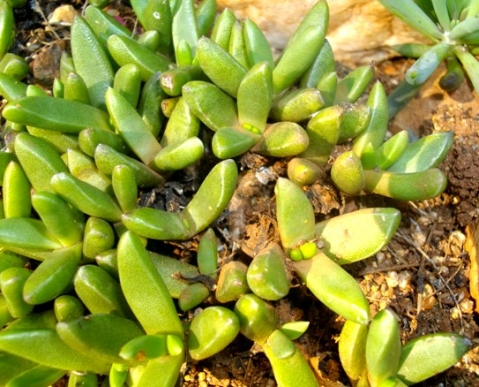 Orthopterum coegana is one of only two species in the genus Orthopterum. The Greek words orthos (erect) and pteron (wing) were used to form the generic name, describing the wings standing erectly upon the open fruit capsules.

Each spreading branch of the dwarf perennial may grow six to eight leaves, forming a mat-like clump on the ground. The thickly succulent leaves are keeled, triangular in cross-section and tapering to acute tips. The decussate leaf pairs are slightly unequal, acquiring a rosette-like appearance with later pairs. Leaf surfaces are smooth and yellow-green to bright green. Leaf surfaces display mottling from a scattering of dark green dots. Seasonal red leaf colouring arrives in rest periods.

This plant seen in the Walter Sisulu National Botanical Garden has no marginal teeth. Some plants have a few soft teeth, resembling those found on Faucaria leaves.

The small species distribution in the Coega area near Uitenhage in the Eastern Cape has a habitat sometimes referred to as Albany thicket. Here O. coegana may hide from full sun, while Faucaria plants, close relatives, will grow in the same areas, but commonly in the open.

This habitat is unfortunately severely degraded, in fact nearly destroyed through quarrying, dumping of waste and other human activities. The species hovers on the brink of extinction early in the twenty first century as one of South Africa's many critically endangered species (Smith, et al, 1998; iSpot; www.redlist.sanbi.org).