Home » TYPES » Mesembs » Odontophorus marlothii
Back to Category Overview
Total images in all categories: 11,110
Total number of hits on all images: 5,777,843 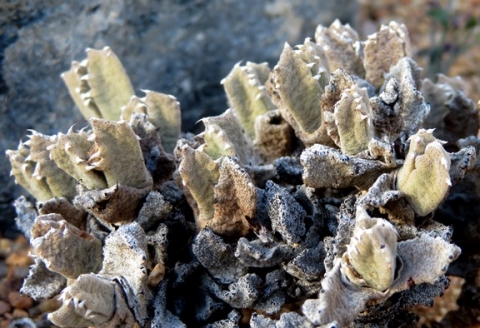 Odontophorus marlothii, previously known as O. meyeri, is a branching, dwarf succulent that forms compact clumps or small mats on the ground.

The branches may be erect (mainly in the centre of the clump) or prostrate and elongated (mainly at the clump perimeter growing after flowering). Three or four leaf pairs may grow from one branch.

The distribution in part of Namaqualand is small, mainly south of Steinkopf; the species endemic to the Northern Cape.

The plants grow in succulent Karoo shrubland on gravelly north to northwest-facing slopes. Although rare, the species population is thought to be stable in habitat early in the twenty first century (Frandsen, 2017; Smith, et al, 1998; Herre, 1971; iNaturalist; http://redlist.sanbi.org).