Home » TYPES » Mesembs » Odontophorus marlothii shortly after the flower
Back to Category Overview
Total images in all categories: 11,506
Total number of hits on all images: 6,515,823 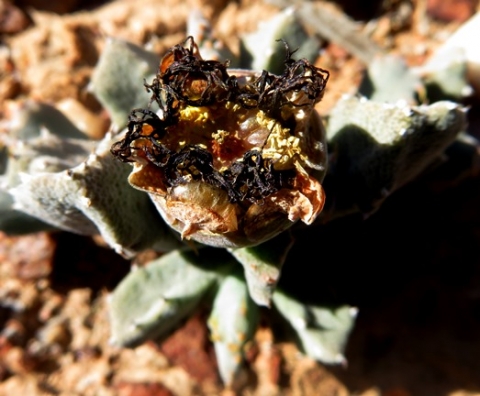 Photographed in August, the second month of the generally expected flowering season of all five the Odontophorus species of Namaqualand and the Richtersveld, it was still too late to catch the bright yellow petals of the Odontophorus marlothii flower.

The flower centre is mostly yellow, sometimes white. The short-stalked, strongly scented flowers have a few whorls of straight, spreading, narrow petals. The stamens grow in an erect bunch with no staminodes present. Some of the few fleshy sepals have membranous margins. Flowers open by noon and close by dusk.