Home » TYPES » Mesembs » A mesemb bearing capsules
Back to Category Overview
Total images in all categories: 11,894
Total number of hits on all images: 7,136,493 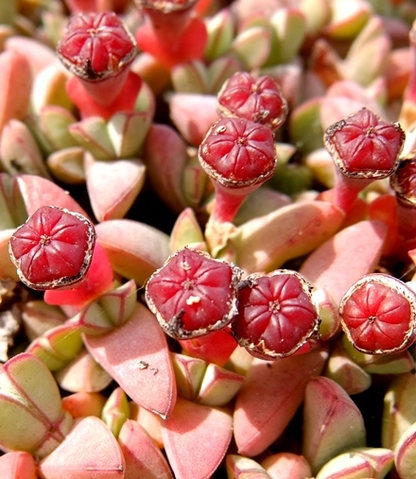 Mesembs or vygies, scientifically the Aizoaceae plant family, perform several magnanimous functions in nature, beneficial to many animals as well as people of Africa, Australia and New Zealand where they grow in the wild. The highest concentration of mesemb species and genera exists in the well-known, arid Richtersveld of Northern Namaqualand.

Mesembs often stabilise soil. Various shapes and sizes of the little to biggish plants occur in a wide range of soil types and climates, not only their general favourite, a well-drained sandy gravel.

All kinds of mesemb flowers present food to countless insects, their main pollinators. This happens all year round as many vygies and insects coinhabit different regions. It happens during daytime but also at night as the bright colours attract the majority of insects, while the lighter flower colours often lure moths and other fly-by-nights.

No aspersions are cast here on non-human species active after dark. They cater for real needs and extend the limits of biodiversity. In addition, rodents often feed on the mesemb fruits (also often after dark).

Florent Grenier speaks of the indigestible plethora of scientific names of plants of Namaqualand. The untold colours, shapes and sizes from rampant speciation challenge many non-scientist aficionados of the little succulents when they try to differentiate and name them.

And when grouping them into families, they soon realise that Linnaeus had a point inventing the binomial names for the integrated taxonomy of all living things existing today. The problem becomes finding the right name for each in the haystack of Latin and Greek words used in the formal nomenclature. The common names are no better for they differ across regions, use the same name for different plants and don’t cover all the known species.

Geographically and climatically many mesembs hang out in areas where many other plants don’t venture, predominantly the southwestern parts of Africa from Angola to the Western Cape, a winter rainfall region. Inundation is often low there. As a result some vygies evolved in various ways into drought resistant specialists.

Some, like the lithopses are called living stones and some are quite long-lived despite the harshness of their surroundings. There are mesembs that even retreat into subterranean residual forms for survival through the offseason.

The fruits in picture were photographed in spring. Many mesembs bear pebble-like capsule fruits that open when wet and ripe. After summer flowering, the newly produced mesemb seeds are often ready for dispersal in time for the next winter rains. The dispersal of mesemb seeds received much attention late in the 20th century in the biology of dissemination stimulated by the work of Darwin on adaptations for survival (Grenier, 2019; Smith, et al, 2017; Smith, et al, 1998; Herre, 1971).