Home » TYPES » Mesembs » Lampranthus species, Namaqualand
Back to Category Overview
Total images in all categories: 10,175
Total number of hits on all images: 4,836,375 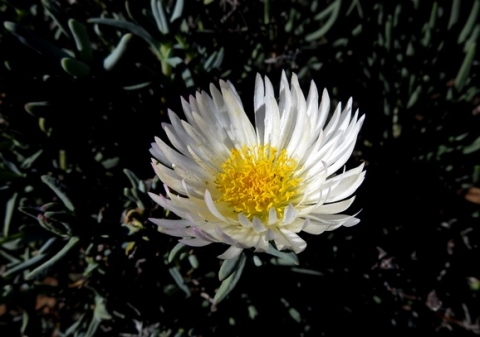 This white-flowering Lampranthus-like mesemb was seen in August in Namaqualand, west of Springbok.

Lampranthus reptans bears similar white flowers but occurs in a southerly part of the Western Cape only. L. haworthii is also of the Western Cape, especially the Little Karoo but its distribution might extend into Namaqualand. It is in Afrikaans known as the persvygie (purple mesemb) but does have a less-seen white-flowering form… low likelihood on two counts but still. There are about 22 Lampranthus species found in Namaqualand.

Many yellow anthers form a spreading cluster in the flower centre of the plant in picture. The pointed white petals growing in several whorls spread and curve in slightly. The five sepals are broad at the base, attenuating to acutely pointed tips.

Opposite pairs of equal leaves are slightly triangular in cross-section, slightly fused at the base and shallowly channelled above. The leaf tips are pointed to blunt. The leaf surfaces are smooth, blue-grey in colour (Smith, et al, 1998; Vlok and Schutte-Vlok, 2010; iNaturalist; http://redlist.sanbi.org).