Home » TYPES » Mesembs » Lampranthus emarginatus leaves
Back to Category Overview
Total images in all categories: 10,175
Total number of hits on all images: 4,836,335 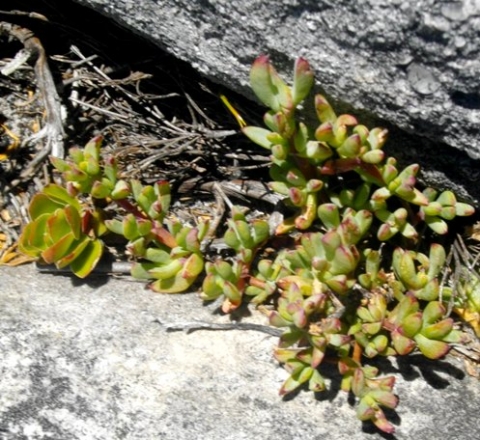 This small leafy mesemb was found sprawling on Table Mountain in November without flowers. It nestled in a crevice of the sandstone rocks, clearly pleased with living conditions. The grey-green leaf pairs have mottled surfaces and reddish tips. The sharp leaf keels making the leaves triangular in cross-section curve inwards, rounded below like little boats, suggesting Lampranthus emarginatus, the clusterleaf brightfig.

There is, however, also Erepsia anceps with similar red leaf tips, surface mottling and greyish colours. Both species may be sprawling or erect. Lampranthus and Erepsia are both large genera with many lookalikes, also in the area.

That both grow pink daisy-like flowers doesn't help now. The leaf-tips curve out in E. anceps, not present here, so L. emarginatus.

For company this plant has a small Crassula coccinea sharing the lodgings. Betting people might favour the mesemb to flower first.

L. emarginatus grows all over the Cape Peninsula, the Hottentots Holland Mountains and Durbanville. The plants grow in the open in sandy or clayey soils, often among rocks. The species is not considered to be threatened in its habitat early in the twenty first century (Clarke and Mackenzie, 2007; Bond and Goldblatt, 1984; iSpot; iNaturalist; http://redlist.sanbi.org).