Home » TYPES » Mesembs » Khadia carolinensis
Back to Category Overview
Total images in all categories: 12,081
Total number of hits on all images: 7,379,076 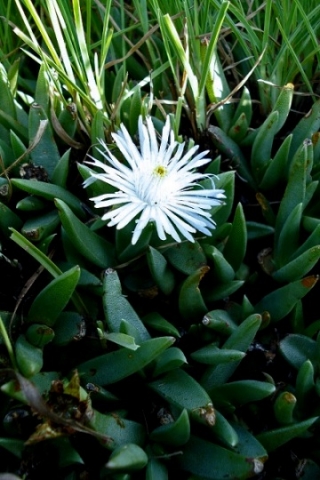 Khadia carolinensis is a dwarf succulent branching mainly underground, with branches surfacing close together to form a dense and somewhat spreading mat of erect leaves. The leaves are succulent, occurring in opposite pairs. They curve slightly, mostly inwards as they taper towards their tips. The leaves have distinct keels and angled margins, giving them a triangular appearance.

As the specific name anticipates, this plant was seen near Carolina (in January) on the Highveld grassland; the place where the first described specimen was found and the species still grows. This plant typically grows at altitudes above 1400 m in quartzitic soil. In spite of habitat loss, the plant still has a stable population in its distribution area early in the twenty first century (Smith, et al, 1998).