Home » TYPES » Mesembs » Khadia alticola
Back to Category Overview
Total images in all categories: 11,901
Total number of hits on all images: 7,141,980 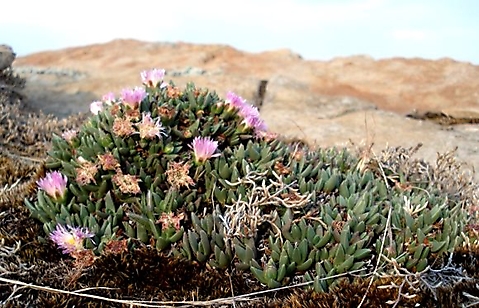 Khadia alticola is a compact leaf succulent growing horizontal rhizomes and branches from the thickened rootstock to form mats.

The equally paired, opposite leaves are short, stubby and basally fused. The leaves are keeled, triangular in cross-section in their upper parts and about 15 mm long. The leaf-tips are acutely pointed. Leaf colour is variable from dark to grey green, bright to dull green with fine dots.

The species distribution is in northwestern KwaZulu-Natal near Utrecht and in Mpumalanga on the Steenkampsberge near Belfast where the photo was taken.

The habitat is montane grassland at high elevations in quartzitic, sandy soil among rocks. While the species is rare, its population is considered to be stable in habitat early in the twenty first century (Frandsen, 2017; Smith, 1998; iNaturalist; http://redlist.sanbi.org).