Home » TYPES » Mesembs » Jordaaniella spongiosa
Back to Category Overview
Total images in all categories: 11,538
Total number of hits on all images: 6,618,650 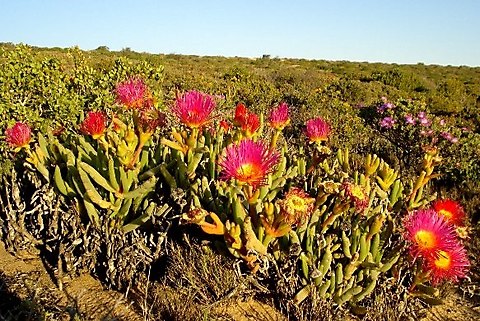 Jordaaniella spongiosa, commonly in Afrikaans the volstruisvygie (ostrich mesemb) and previously Cephalophyllum spongiosum, is a creeping leaf succulent. The plant branches much and roots at the nodes.

The largest of the jordaaniellas, J. spongiosa grows large mats of erect, smooth leaves between long, spongy, light-coloured (red, yellow or green) internodes. The spindle-shaped to cylindrical and slightly three-angled leaves taper to both ends. There may be faint red along the margins and keels or only at the rounded tips.

The species distribution is along the Northern Cape coast of Namaqualand from Hondeklip Bay to near Alexander Bay.

The habitat is succulent strandveld, the terrain flat, open and sandy. Moisture is received both from the meagre winter rain and periodic coastal fog. The species is not considered to be threatened in its habitat early in the twenty first century.

There are only four species in the Jordaaniella genus. The plants are mostly found in coastal sand of the Strandveld in the west of the country and parts of southern Namibia (Frandsen, 2017; Leistner, (Ed.), 2000; Cowling and Pierce, 1999; http://redlist.sanbi.org).