Home » TYPES » Mesembs » Hereroa aspera
Back to Category Overview
Total images in all categories: 11,894
Total number of hits on all images: 7,135,044 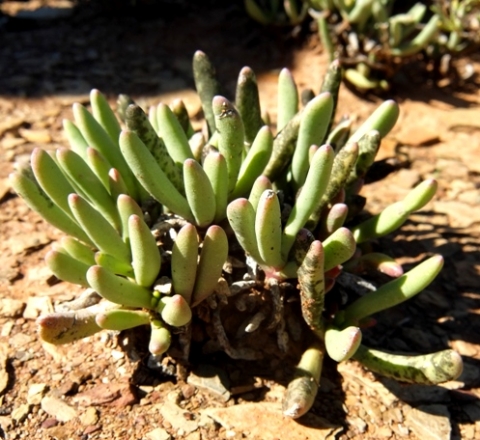 Hereroa aspera is a dwarf succulent that grows short, spreading branches and a dense tuft of erect, succulent leaf pairs. In flower the plant achieves heights around 8 cm. Aspera (Latin) means rough or hard, among other meanings unrelated to plants.

The paired, hairless, finger-like leaves curve in to their blunt tips; they are nearly cylindrical with just a suggestion of triangular shape in cross-section. Young leaves are pale blue-green, often with red tips, the older ones in the photo covered in black lichen.

H. aspera belongs to a genus of 33 species in the Aizoaceae family. Named after the Herero people of Namibia where some of the species are widespread, some of them also grow across South Africa from the Western Cape to Limpopo, but are not found in the eastern region of the country, particularly KwaZulu-Natal and Mpumalanga.

H. aspera is mainly a Little Karoo species, growing in clay soils, also on the southern slopes of the Langeberge near Swellendam. This plant was photographed near Oudtshoorn. The species is not considered threatened in habitat early in the twenty first century (Vlok and Schutte-Vlok, 2010; Smith, et al, 1998).