Home » TYPES » Mesembs » Hallianthus planus
Back to Category Overview
Total images in all categories: 11,538
Total number of hits on all images: 6,618,273 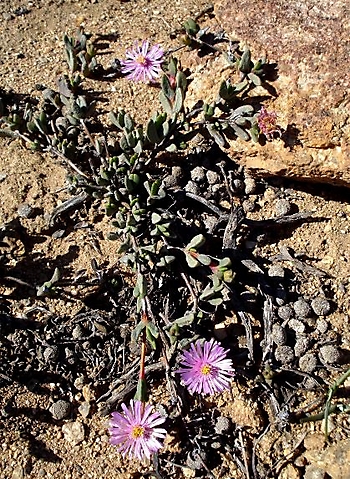 The monotypic genus used to be part of Leipoldtia, separated in 1983 on account of the unique, turret-shaped fruit capsules with elevated centres. The specific name, planus, is a Latin word meaning flat plane, probably referring to the plant's flat growth habit.

The species distribution is in the west of the Northern Cape and slightly into the Western Cape in Namaqualand. It ranges from certain Richtersveld mountains in the north and the western coastal region to the Tanqua Karoo in the southeast.

The habitat is sandstone, quartzite and granite slopes, often in rock crevices and sandy hollows where the chances of moisture are better in this generally arid terrain. The species is not considered to be threatened in its habitat early in the twenty first century (Williamson, 2010; Leistner, (Ed.), 2000; Smith, et al, 1998; iNaturalist; http://redlist.sanbi.org).