Home » TYPES » Mesembs » Esterhuysenia drepanophylla
Back to Category Overview
Total images in all categories: 12,081
Total number of hits on all images: 7,379,014 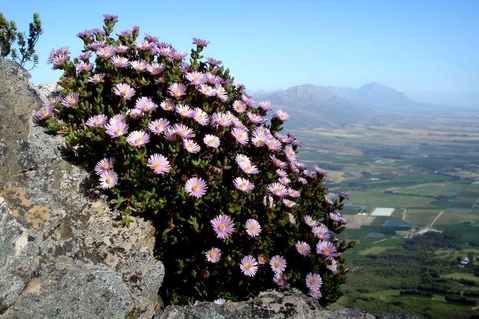 Esterhuysenia drepanophylla is a compact, succulent-leaf shrublet in the mesemb family. Interesting name changes have occurred for the plant, including Lampranthus drepanophyllus, Mesembryanthemum drepanophyllum and Ruschia drepanophylla. Goes to show “that they’re all related”.

The roots of Esterhuysenia plants are fibrous. The many stems of E. drepanophylla are reddish, the plant rounded to a flattish, spreading shape.

The species distribution is in a small part of the Western Cape north of Worcester to around Ceres and Tulbagh.

The habitat is higher sandstone slopes where the plants grow among rocks in fynbos, receiving winter rain and sometimes snow. The species is not considered to be threatened in its habitat early in the twenty first century (Leistner, (Ed.), 2000; Smith, et al, 1998; iNaturalist; http://redlist.sanbi.org).