Home » TYPES » Mesembs » Cerochlamys pachyphylla old leaves
Back to Category Overview
Total images in all categories: 12,087
Total number of hits on all images: 7,392,944 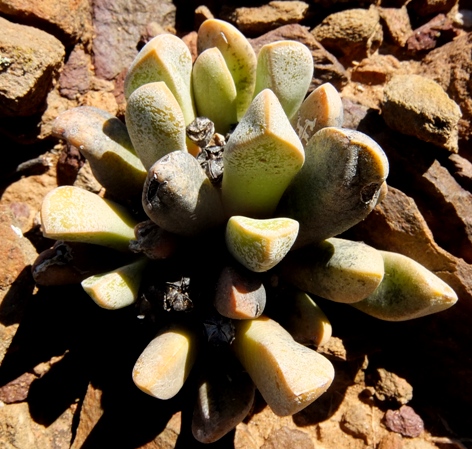 Looking at these old, end of season Cerochlamys pachyphylla leaves seen in April south of Oudtshoorn gives an idea of the plant’s leaf shape. The erect, finger-like succulent leaves grow in pairs shortly joined at the base and variable in appearance.

Old pairs in the dense clump are pushed apart by the new pairs, as well as by flowers appearing between them. A branch may carry up to three leaf pairs. The club-shaped leaves are three-angled near their tips with flat inner surfaces and rounded keels, but may twist sideways at the base, so the pairs don’t always face each other. Leaves may become 7 cm long.

A waxy layer, sometimes peeling in parts, covers the grey-green to yellow-green leaves that have a firm texture (Vlok and Schutte-Vlok, 2010; Smith, et al, 1998).