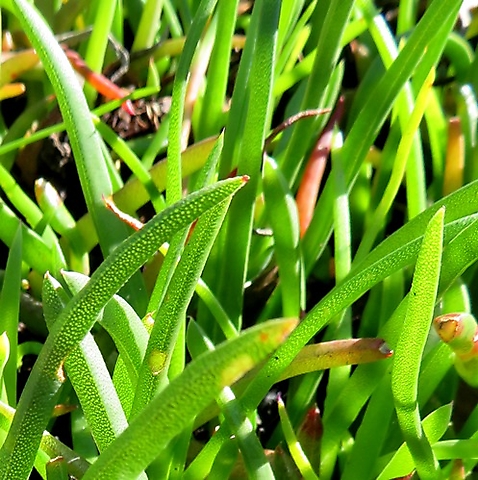 Cephalophyllum parviflorum, commonly known as the Tygerberg trailing vygie, is a prostrate succulent that grows stems to 45 cm long.

The opposite leaf-pairs are decussate, spaced along the stems and clustered at the stem-tips. The leaves are long, succulent and three-angled, tapering to acutely pointed tips. The smooth leaf surfaces are pale green with translucent spots showing conspicuously against sunlight. Leaves become up to 8 cm long.

The flowers growing on long pedicels are yellow with red on the lower surfaces of the petals. A cone of stamens is erect in the flower centre. Flowering happens around midwinter.

The plant is endemic to a small part the Western Cape, from Milnerton to Saldanha.

The habitat is sandy, coastal flats, the vegetation strandveld scrub, fynbos and renosterveld. The species is considered to be critically endangered in its habitat early in the twenty first century. This is due to extensive human impact causing habitat destruction, pollution, alien vegetation invasion and by harvesting the plants themselves from the few places where they still grow (Bond and Goldblatt, 1984; iNaturalist; http://pza.sanbi.org; http://redlist.sanbi.org).