Home » TYPES » Mesembs » Cephalophyllum loreum
Back to Category Overview
Total images in all categories: 10,526
Total number of hits on all images: 5,178,783 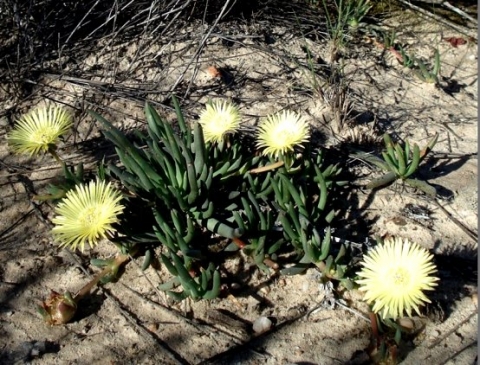 Cephalophyllum loreum is a dwarf perennial, a leaf succulent that grows branches with prostrate, creeping habit. The internodes between leaf-pairs are distinctly elongated, green or reddish.

Tufted leaves grow crowded over the centre on the main stem, opposite on the spreading branches, the leaves on one plant often of several lengths. The leaves are erect, between terete (cylindrical) and three-angled with convex sides, the surfaces covered in tiny dots. Leaves become up to 8 cm long.

The generic name, Cephalophyllum, is derived from the characteristic crowded leaf clusters like heads or balls; the Greek words that form the basis are kephale meaning the head and phullon meaning a leaf.

The species is distributed in the west of the Western Cape. It grows in part of the semi-arid winter rainfall region. The species is not considered to be threatened in its habitat early in the twenty first century (Smith, et al, 1998; Herre, 1971; iNaturalist; http://redlist.sanbi.org).