Home » TYPES » Mesembs » Braunsia maybe
Back to Category Overview
Total images in all categories: 11,506
Total number of hits on all images: 6,491,785 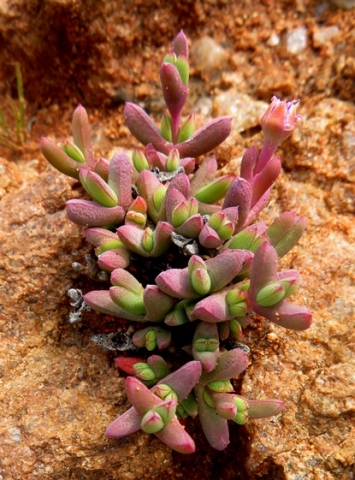 This small, shrubby mesemb seen in the south of Namaqualand next to the road during August has grown short, equal, keeled leaf-pairs, triangular in cross-section and fused at the base. The branches multiply from leaves at the stem-tips in compact structure, without stems becoming long.

The biggest leaf-pairs, only second from the top are already wrinkling, although there had been a recent rainy season. The thickly succulent young leaves bulge a little beyond flat surfaces, the angles not becoming rounded apart from possibly right at the base, the margins possibly cartilaginous. Pale green when newly appearing, the margins turn red first, the blade surfaces later into a pale, dull purple. Leaf pairs initially ensconced in the grip of the decussate earlier leaf-pair, later develop stalks, while additional pairs emerge next to the stalk from the seam of the blades of each older leaf-pair.

This growth pattern is common to many mesembs, notably in some dwarf mesemb shrubs, certain plants related to Lampranthus and some mat-forming mesembs like Antimima (although this one is unlikely to get as big). The recently withered flower in picture has a substantial stalk and five pointed sepals abruptly angular at the flower base. A smaller, old dry fruit leftover appears black and six-angled. What colour the petals might be is unknown.

Speculation as to the plant’s identity may favour Braunsia, a genus currently comprising about eight species, although the leaf colour may be too red for making that a strong option. Several other possibilities could be entertained. Certainty in knowledge is such and elusive to illusive matter (Smith, et al, 1998; iNaturalist).