Home » TYPES » Mesembs » Braunsia apiculata unusual flower
Back to Category Overview
Total images in all categories: 11,110
Total number of hits on all images: 5,778,143 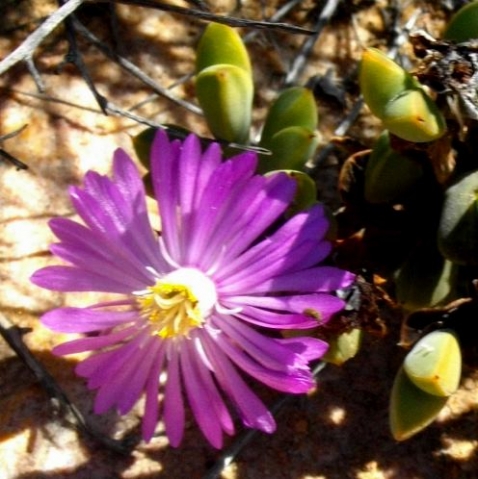 This Braunsia apiculata flower clearly shows its white staminodes, the (extra) stamens without anthers. They normally surround the viable stamens tipped with yellow anthers in an erect ring. Here some of them got weak, tired or disinterested and have started to sag and curve down as if to recline upon the petals.

Right in the centre of the bunch of (male) stamens four off-white styles, female flower parts, are to be seen. They are fleshy, awl-shaped and thicker than the staminodes, having opened some personal space for themselves. They curve out, taller than the stamens.

The dark leaf tips, culmination points of the three velvety leaf planes connecting in three yellowish ridges upon every leaf, are prominent in the photo (Vlok and Schutte-Vlok, 2010; Smith, et al, 1998; www.cactus-art.biz).