Home » TYPES » Mesembs » Braunsia apiculata
Back to Category Overview
Total images in all categories: 11,538
Total number of hits on all images: 6,618,675 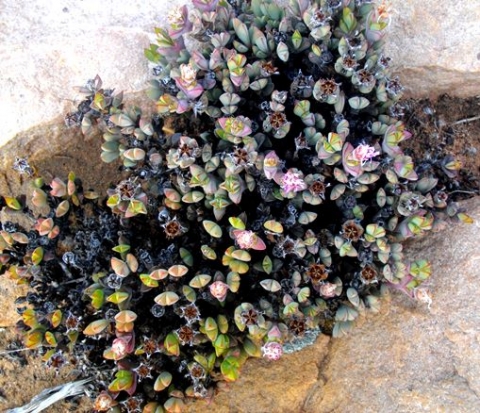 Braunsia apiculata is a leaf succulent with low-growing, mat-forming or rounded habit, reaching 20 cm in height. The woody stems root at the nodes.

The species distribution is mainly in the Western Cape and slightly into the Northern Cape, from the Cederberg to the Little Karoo.

The habitat is sandstone outcrops, among quartzite pebbles or in shale among semi-arid vegetation types including renosterveld and fynbos. The species is not considered to be threatened in its habitat early in the twenty first century (Vlok and Schutte-Vlok, 2015; Smith, et al, 1998; www.cactus-art.biz; www.redlist.sanbi.org).