Home » TYPES » Mesembs » Astridia longifolia flower
Back to Category Overview
Total images in all categories: 11,528
Total number of hits on all images: 6,614,417 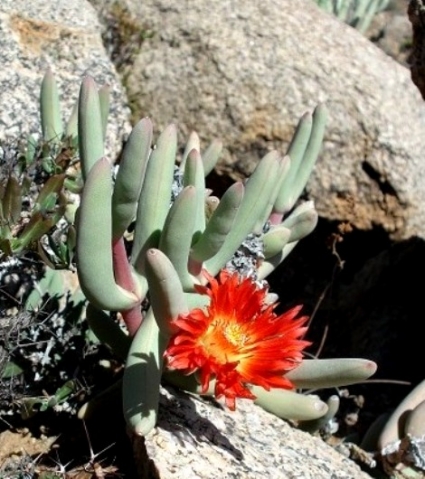 The flower of Astridia longifolia has orange-red petals arranged in two whorls that look somewhat ragged in this flower. The petals are cream-coloured at the base and so are the lower parts of the outer staminodes in the central column. Anthers are concentrated in the centre of the column on the viable stamens.

Flowering time is thought to happen late in summer, but this one was found in the Helskloof in the north of the Richtersveld, flowering in July.

The leaves are full and fleshy in midwinter when rain has brought the plant a growth phase. The almost cylindrical leaf pairs are erect, adorned with reddish seams like old-fashioned silk stockings and dark tips. Sections of similarly reddish stems are visible between the spaced leaves (Smith, et al, 1998; iSpot; Williamson, 2010).