Home » TYPES » Mesembs » Astridia longifolia
Back to Category Overview
Total images in all categories: 12,061
Total number of hits on all images: 7,360,041 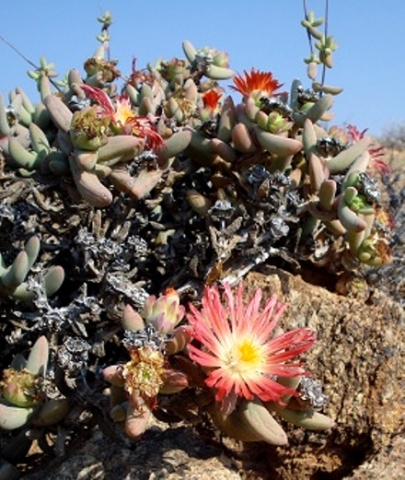 The Astridia genus comprises eight species of erect, woody mesemb shrublets. They occur on both sides of the Gariep River close to the west coast, i.e. the north-western part of the Richtersveld in South Africa and the southern coastal region of Namibia.

The leaf pairs of Astridia plants are typically spaced, showing bits of stem in between. Leaves vary from near triangular to cylindrical in shape, spreading in some species, erect and parallel in others. Parts of dried leaf sheaths or bases tend to remain on the older, woody stems.

Flowers of Astridia species vary in colour from orange as here to white, yellow, purple, pink or red. Fruit capsules have six locules with raised ridges on the top, similar to capsules of plants belonging to the Ruschia genus (Smith, et al, 1998; iSpot; Williamson, 2010).