Home » TYPES » Mesembs » Astridia herrei
Back to Category Overview
Total images in all categories: 12,061
Total number of hits on all images: 7,359,885 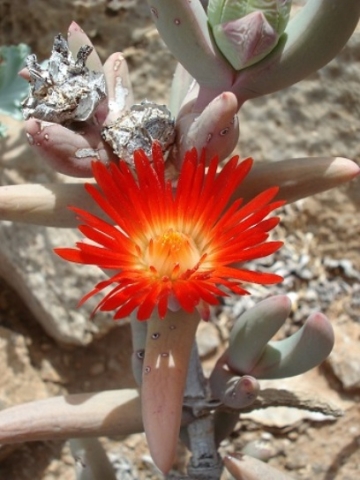 The orange-red flowers of Astridia herrei have white sections at the petal bases as well as on the lower parts of the staminode cone. The characteristic Astridia boat-shaped bracts subtending the flower can just be seen below the fleshy sepals on the bud at the top right. Dry capsules are also visible, with blackened sepal tips and the remains of the six valves on top of the locules in which the seeds have been produced.

In all, this appears to be a successful, fulfilled plant with proof of having met its procreational commitments. Still, it looks small and insignificant in this expanse of semi-desert that tests all.

At least four of the eight species of the Astridia genus may produce brick-red flowers such as these. Tiny leaf and other shape variations indicate to which species each plant belongs. Usually inspection of the papillae of the seeds is needed to give definitive identification answers when plants are as similar as the Astridia plants depicted here. Even the use of a microscope might be necessary. The distinctions used to post these orange-red flowering Astridia plants in this Album reflect the wisdom of experts who contributed to an analytic exercise performed on iSpot (Smith, et al, 1998; iSpot).