Home » TYPES » Mesembs » Aridaria noctiflora
Back to Category Overview
Total images in all categories: 12,061
Total number of hits on all images: 7,359,962 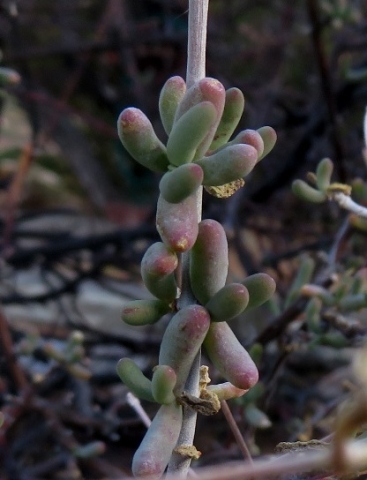 The paired leaves are nearly cylindrical, round-tipped and fused at the base. The smooth leaf surfaces are blue-grey to blue-green, sometimes suffused with red, especially near the tips.

The generic name, Aridaria, is derived from the Latin word aridus that means dry, referring to the arid, karoid habitat of the plants. The three subspecies of A. noctiflora occur in the Western Cape, the Northern Cape and the Eastern Cape as well as the south of Namibia. They grow in the open in sandy places. The species is not considered to be threatened in its habitat early in the twenty first century.