Home » TYPES » Mesembs » Argyroderma fissum
Back to Category Overview
Total images in all categories: 11,235
Total number of hits on all images: 5,945,231 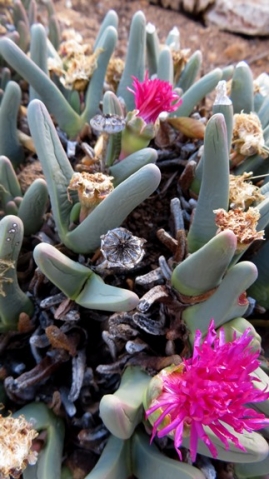 This is the most common and widespread member of its genus, although the finger-like leaves are not typical of the genus: the others often thicker-leaved bearing rounder and shorter leaf-bodies.

The species distribution is in the north of the Western Cape, in and beyond the Knersvlakte and from near the sea in the west, the Olifants River in the south to north of Bitterfontein.

The habitat is succulent and Nama Karoo, typically on open quartz gravel plains and slopes, but also in other growing conditions given the wide distribution of the species. The winter rain here amounts to about 100 mm per annum. The species is not considered to be threatened in its habitat early in the twenty first century (Frandsen, 2017; Smith, et al, 1998; Herre, 1971; iNaturalist; http://redlist.sanbi.org).