Home » TYPES » Mesembs » Argyroderma delaetii
Back to Category Overview
Total images in all categories: 12,061
Total number of hits on all images: 7,360,073 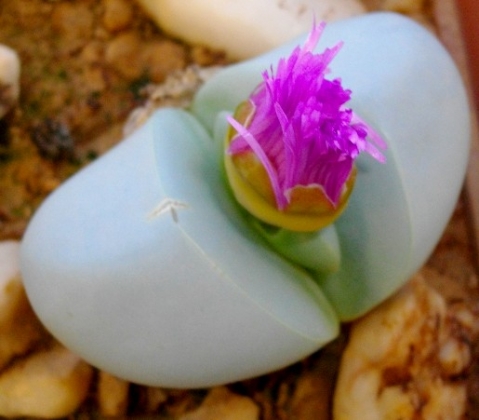 Argyroderma delaetii is a dwarf leaf succulent that grows one solitary leaf pair, or forms clumps of them on short, prostrate stems. The leaves stand only 3 cm tall, while in flower the plant reaches 5 cm. The Afrikaans common name of bababoudjies (little baby bums) is shared with some other Argyroderma species that have similar, very succulent leaves.

The silver-skinned leaves shaped like egg-halves are flat-surfaced on the inside where the V-shaped slit between them allows either the next (decussate or perpendicular) leaf pair or a flower to appear.

Old, dry leaf skins remain on the plant for long, serving as “protective clothing”. Further protection against the elements is gained by the plant sinking a portion of the leaves into the ground.

The flowers may be purple, yellow or occasionally white and 3 cm to 4 cm in diameter. Flowering happens from mid-autumn to early winter. The fruits have 14 to 24 valves that open when wet and release seeds, but close again when dry to disperse what had remained during later rain.

Without flowers the small leaves are often missed in their habitat of bare white quartz gravel patches of the Knersvlakte near Vanrhynsdorp; the plant being endemic to this Western Cape region. The species is not considered to be threatened in its habitat early in the twenty first century (www.cactus-art.biz; www.redlist.sanbi.org).