Home » TYPES » Mesembs » Apatesia helianthoides
Back to Category Overview
Total images in all categories: 11,921
Total number of hits on all images: 7,169,940 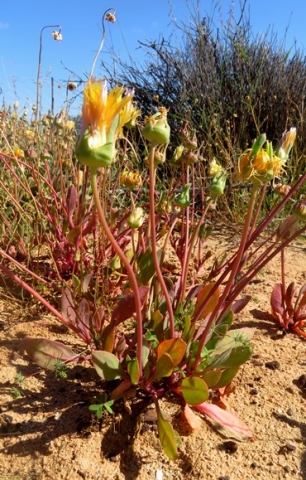 Apatesia helianthoides is a flat-leaved annual growing a tuft or rosette of thinly succulent or fleshy leaves followed by short, spreading, decumbent branches, reaching 20 cm in height when flowering.

The generic name, Apatesia, is derived from the Greek word apatesis meaning deception, derived from the resemblance to a similar Aizoaceae genus, Hymenogyne of largely overlapping geographic distribution, in which a protective layer envelops each seed.

The slightly convex fruit capsules have eight to twelve locules, expanding keels and valve covers lacking wings. These valves open when wet and close when dry, dishing out ripe seeds in instalments at every spell of rain. This spreads survival risk, improving the chances for some new plants to find conditions where they may succeed.

Some of the seeds of this species do not develop inside their original locules but in seed pockets below them. Although only few of the seeds develop thus, the phenomenon is shared among several mesemb genera. The seeds of A. helianthoides are smooth and globose.

The species distribution is in the northwest of the Western Cape, from the Knersvlakte of southern Namaqualand to as far south as Tulbagh. The photo was taken during August on the Maskam Guest Farm near Vanrhynsdorp.

The habitat is arid to semi-arid flats where the plants grow in red, sandy soil, receiving (some) winter rain. The plants often grow in disturbed places, probably benefitting from the availability of previously ploughed fields in the region, these days abandoned to grazing. The species is not considered to be threatened in its habitat early in the twenty first century (Le Roux, et al, 2005; Leistner, (Ed.), 2000; Smith, et al, 1998; Eliovson, 1990; Herre, 1971; iNaturalist; http://redlist.sanbi.org).