Home » TYPES » Mesembs » Antimima piscodora, a fishy story
Back to Category Overview
Total images in all categories: 11,442
Total number of hits on all images: 6,209,947 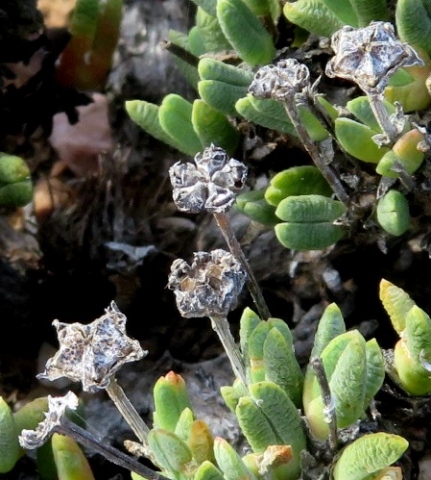 The leaves of Antimima piscodora smell like old fish, a feature shared with several Antimima species.

The specific name, piscodora, is derived from the Latin words piscis meaning a fish and odor meaning smell, perfume or stench. The generic name, Antimima, derived from the Greek word antimimos means imitating.

So, these plants copy or guise, or simply bear features involving chance similarities noted by people. Fish have been rare in the Karoo for many millions of years, while these plants have been around for long; the past itself is gone forever apart from its signs used in human reconstructions.

A. piscodora leaves grow in equal pairs of two kinds, every second pair forming a persistent sheath for the following pair to wear as a covering during the resting season. There is usually only one of each kind per season, apart from a rare third kind formed on the occasional long shoots, a short, sheath-forming pair.