Home » TYPES » Mesembs » Antimima piscodora
Back to Category Overview
Total images in all categories: 11,104
Total number of hits on all images: 5,773,491 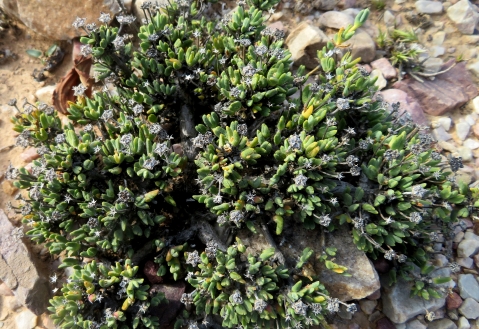 Antimima piscodora is a compact leaf succulent that branches on the ground, forming a mat. Antimima plants are known for growing the occasional long shoot, as to be seen on the plant in picture. Some branch parts on the old plant in picture have become bare in the sections before the stem-tips.

In season these plants are covered in a profusion of pale pink flowers with filamentous staminodes surrounding the stamens in an erect, central cone. The photo was taken in September, bloomtime far behind.

The species, a Western Cape endemic, is uncommon and poorly known, growing (at least) in the Great Karoo north of Beaufort West, also near Prince Albert and across the Swartberg Mountains to the south near Calitzdorp in the Little Karoo where the photo was taken.

Due to data deficiency the plant’s status in terms of survival in nature has not been determined. The fact that several Antimima species smell of fish probably confuses the issue (Smith, et al, 1998; iNaturalist; http://redlist.sanbi.org).