Home » TYPES » Mesembs » Antimima hantamensis
Back to Category Overview
Total images in all categories: 11,538
Total number of hits on all images: 6,618,012 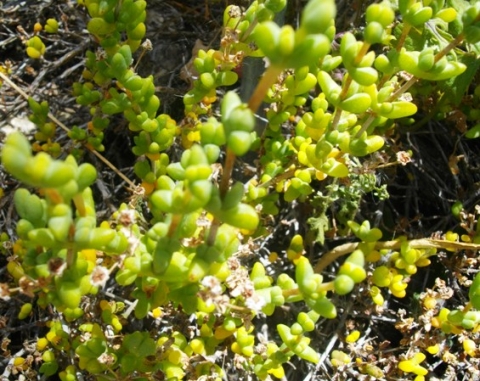 Antimima hantamensis is a low growing mesemb or vygie, belonging to the Aizoaceae family. There are 99 recorded species in this genus. Several of them are referred to as cushion mesembs, referring to the compact little hills of small succulent leaves developing an elevation in the centre over long stems hidden below.

A. hantamensis has short, stubby, light green, succulent leaves growing on spreading and erect stems. This is not one of the cushion plants. It lives in Kirstenbosch and will probably not look as good in its natural, arid habitat. The species is said to be evergreen, grown for its foliage, i.e. the flowers are small as is common among the antimimas (http://davesgarden.com; http://ww2.bgbm.org).

The genus resembles Ruschia. The main differences are in the fruit capsules of Antimima having distinguishing lobed and broadened keels. Many of the plants in the Antimima genus were transferred from Ruschia recently. A. hantamensis had two earlier names under Ruschia, two under Eberlanzia and one as a member of the Mesembryanthemum genus (Smith, et al, 1998).

Studying rare plants that grow in remote places is sometimes a daunting challenge. The jigsaw pieces are collected in a drawn out, painstaking manner by a succession of investigators who discover partial answers that add up over time in the gradual accumulation of reports to the people of the future. Along the way not all of the records are consistent in their message or accessible to every interested onlooker.