Home » TYPES » Mesembs » Antimima evoluta
Back to Category Overview
Total images in all categories: 10,335
Total number of hits on all images: 5,029,662 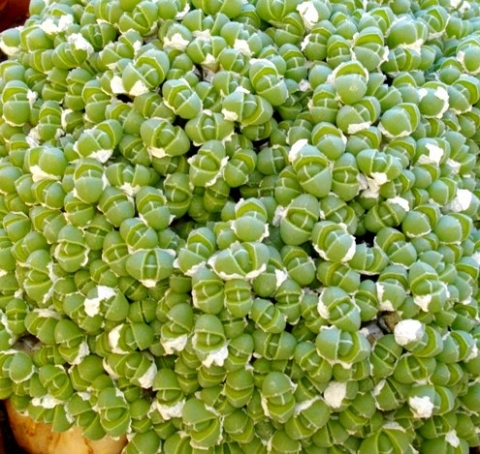 Antimima evoluta is a mat-forming perennial leaf succulent, part of a group in Afrikaans known as kussingvygies (cushion mesembs). Short branches proliferate from the base, packing a growing multitude of leaf pairs densely together at their tips.

The hemispherical leaf pairs growing opposite each other are parted by each subsequent pair pushing their predecessors on the stem apart for a place in the sun. In season the flower buds do the same. There is a faint keel visible on the rounded outer leaf surface, green to silvery and waxy, often mottled. A tiny fringe of whitish hairs grow along the angular leaf margins, where the rounded outer surface meets the flat inner one. Dry white remains of older leaf pairs persist here and there along the green plant surface in picture.

Small purple flowers comprised of up to 40 petals around a centre of pink staminodes and yellow anthers are borne mostly in winter. The almost sessile fruit capsule has five locules and persistent bracteoles.

The species distribution is inland from the west coast on both sides of the border between the Western and Northern Cape into Namaqualand; the species is a South African endemic.

The plant grows in the open among quartzite and sandstone rocks at elevations between 200 m and 400 m. The species is not considered to be threatened in its habitat early in the twenty first century (Smith, et al, 1998; www.llifle.com; www.redlist.sanbi.org).