Home » TYPES » Mesembs » Amphibolia rupis-arcuatae
Back to Category Overview
Total images in all categories: 11,419
Total number of hits on all images: 6,200,282 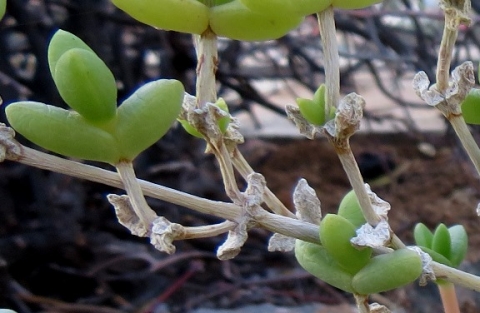 Amphibolia capsules have valve wings resembling Lampranthus species and closing bodies like those of Ruschia plants. The generic name, Amphibolia is a Greek word meaning uncertainty or doubt.

The leaves may dry out early, being near the newest growth at the stem tip, remaining marcescent on the whitish stems.

The plants are found in the west of Northern Cape in Namaqualand and southern Namibia. They grow in sandy soil in arid winter rain terrain. The species is not considered to be threatened in its habitat early in the twenty first century (Smith, et al, 1998; Herre, 1971; iNaturalist; iSpot; http://redlist.sanbi.org).