Home » TYPES » Mesembs » Amphibolia rupis-arcuatae young stem-tip
Back to Category Overview
Total images in all categories: 11,442
Total number of hits on all images: 6,209,868 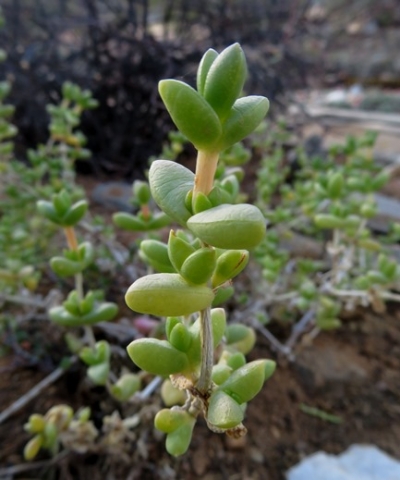 The short, thick, succulent leaves of Amphibolia rupis-arcuatae grow in opposite pairs fused at the base. The pale to fresh green leaf pairs are decussate (opposite leaf pairs succeeding each other in a perpendicular manner).

The leaf shape is somewhat ovoid and rounded but the margins and keel near the blunt tip are visible in clear lines on the bulging surface. The smooth leaf surface is covered in microscopic wax platelets. It is hard to distinguish among Amphibolia species when they are not flowering.

The star-like flowers grow solitary or in small clusters on short stalks surrounded by pinkish leaf-like bracts. The five sepals are nearly equal.

The flowers are small, two whorls of petals spreading around a central staminal cone. The petals are pink, white or pale yellow. Where darker petal colouring  is present, it is strong at the tip and along a central line to the base; the rest being white.

Flowers appear in summer. They open during the day.

The fruit capsule has five locules that do not close once opened. The valves have broad wings and the expanding keels are erect and may be irregularly torn. There are covering membranes and small closing bodies (Smith, et al, 1998; Herre, 1971; iNaturalist; iSpot).