Home » TYPES » Mesembs » Aloinopsis luckhoffii
Back to Category Overview
Total images in all categories: 12,068
Total number of hits on all images: 7,363,072 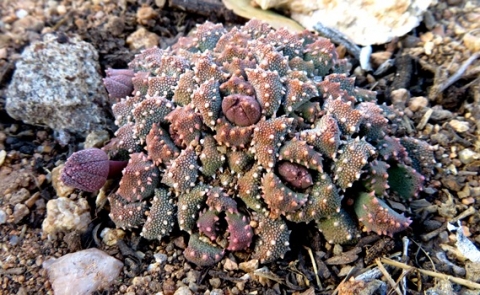 Aloinopsis luckhoffii, commonly known as the Calvinia wartfig and in Afrikaans as the blinkoogtoontjie (little shiny eye toe(!)), is a dwarf, tufted succulent of the mesemb family growing thick, tuberous roots.

It forms dense mats of branched, clustered stem-tip rosettes, each comprising four to six leaves and reaching about 4 cm in diameter. Subtle shades of pale green, blue, brown, purple and more blend and vary across the leaves, embellished with somewhat obscure rows of whitish protrusions growing on them. Buds showing leafy sepals peep from rosette centres, displaying fleshy stalks as they mature; near to opening.

The generic name, Aloinopsis, means resembling an Aloe. Maybe you will one day see an Aloe that looks like this!

A. luckhoffii is a South African endemic found in the border area between the Western Cape and the Northern Cape from Kliprand to Loeriesfontein.

The habitat is succulent Karoo where the plants grow in exposed, sunny places on calcrete flats among quartzite and gneiss, sometimes also on pyritic shale. The small plants are often difficult to see among the stones. The species is common although range-restricted with no known threats, therefore of least concern in habitat early in the twenty first century.

The genus is similar to Titanopsis that never has striped petals in its flowers as some Aloinopsis species do (Smith, et al, 1998; Herre, 1971; http://llifle.com; http://redlist.sanbi.org).