Home » TYPES » Mesembs » Aizoon paniculatum floral stages
Back to Category Overview
Total images in all categories: 10,191
Total number of hits on all images: 4,848,494 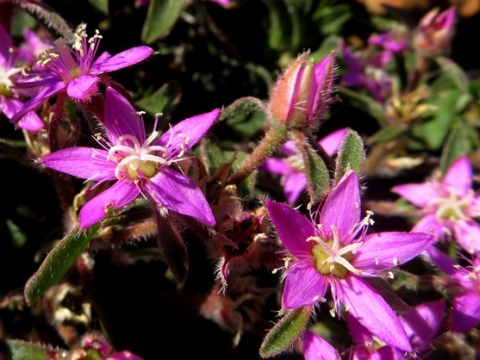 The thick-stalked flowers of Aizoon paniculatum grow in clusters at stem-tips, panicles or cymes that are flattened and forked. There are no petals in this unusual mesemb flower, but conspicuous sepal lobes in a star-shape and two leaf-like, green bracts immediately below the calyx.

The five spreading perianth lobes or sepals are magenta on the inside, (sometimes cream-coloured) and here pale brown on their outside surfaces. The margins of the sepal lobes and their outsides are covered in long, soft, off-white hairs.

The young flower in the upper left corner of the photo has many stamens (fifteen or more) and short white stigma lobes. Its filaments are coloured the same as the sepal lobes. The old flowers in the foreground have long, thickish, white stigma lobes, twisting or curving down. In the old flowers the filaments have become white. A half-opened bud is visible to the upper right.