Home » GENERA A » Aizoon » Aizoon paniculatum old flower
Back to Category Overview
Total images in all categories: 10,534
Total number of hits on all images: 5,183,763 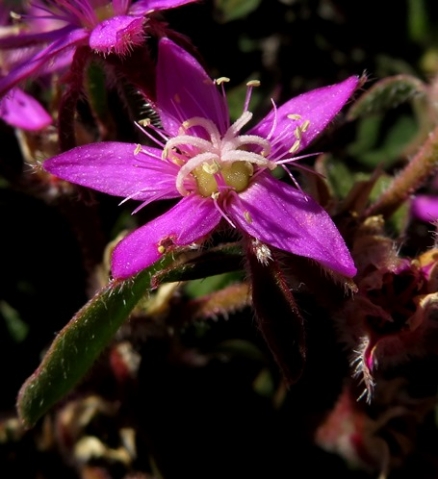 Previous
Image 8 of 17
Next

Six long stigma branches curve down in this older Aizoon paniculatum flower. These branches appear fluffy or granular in texture and finely channelled, thick compared to the filaments.

By now the multitude of stamens are spent; most of their long, thin filaments having lost their creamy anthers.

The sepal lobes as well as the superior ovary in the flower centre still glisten with surface water cells (Manning, 2007; Manning and Goldblatt, 1996; Bond and Goldblatt, 1984; JSTOR; iNaturalist).