Home » TYPES » Mesembs » Aizoon paniculatum young flower
Back to Category Overview
Total images in all categories: 10,185
Total number of hits on all images: 4,845,819 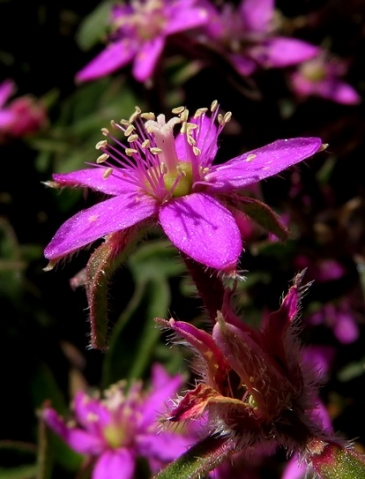 The pollen in these anthers will ripen and be used elsewhere or lost before the stigma is ready to be fertilised. Its fertilisation will happen later by pollen from other flowers once this flower’s supply is no longer viable.

The young stamens in picture have pink-purple filaments, the same colour as the inside of the sepal lobes.

At the sepal lobe ends there are distinct, claw-like tips like artificial nails, positioned slightly behind the blade tips among the hairs (Manning, 2007; Manning and Goldblatt, 1996; Bond and Goldblatt, 1984; JSTOR; iNaturalist).