Home » GENERA A » Aizoon » Aizoon paniculatum green fruit
Back to Category Overview
Total images in all categories: 10,534
Total number of hits on all images: 5,183,691 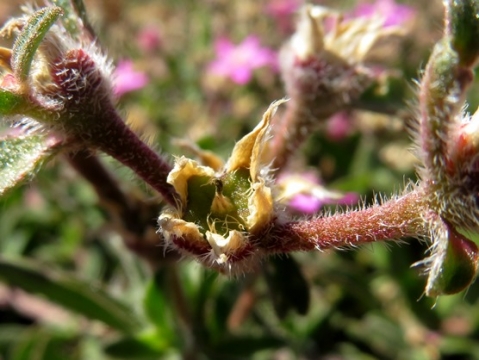 Previous
Image 6 of 17
Next

At this stage in its development the Aizoon paniculatum fruit appears like a star-shaped, olive-green cupcake in hairy and papery surroundings.

The five petal-like sepals are now dry, shrivelled and beige-coloured; its future functionality uncertain. The stigma in the centre is at this stage no better off, resembling a snuffed candle. Water-cells glisten on the unripe capsule surface, indented in its centre.