Home » TYPES » Mesembs » Acrodon bellidiflorus flowers
Back to Category Overview
Total images in all categories: 11,506
Total number of hits on all images: 6,483,462 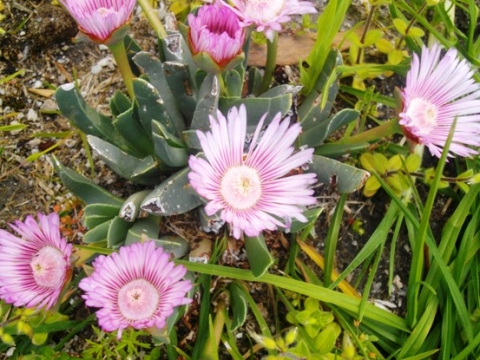 The flowers of Acrodon bellidiflorus grow solitary on sturdy, erect stalks. The flowers have prominent, triangular, fleshy, green sepals. The petals are pale pink, bleaching to white as they mature. A dark pink or red central, longitudinal line runs from the base of each petal to about halfway up its length. The diameter of the flower is about 3 cm. A central cone of clustered stamens is white near the base, pink near the tips and yellow on top as the anthers mature. Flowering happens from the middle of autumn to midwinter.

These pretty flowers (and plants) were among the first South African mesembs to become known in Europe. This happened as early as the 18th century when A. bellidiflorus plants were taken from the Cape of Good Hope and grown in the Netherlands and England (Smith, et al, 1998; Vlok and Schutte-Vlok, 2010).