Home » TYPES » Herbs » Xysmalobium undulatum var. undulatum
Back to Category Overview
Total images in all categories: 11,528
Total number of hits on all images: 6,610,400 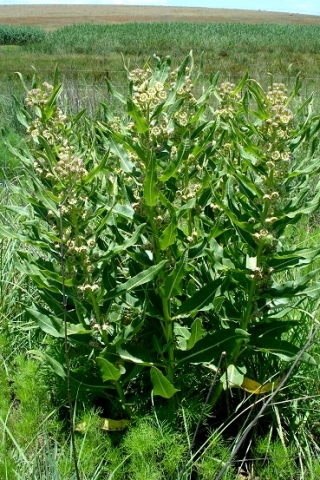 Xysmalobium undulatum var. undulatum, commonly known as uzura (or uzara) and in Afrikaans the bitterwortel (bitter root), is a robust, erect perennial growing anew in spring from a carrot-like rhizome. The stout, hairy stems branch, reaching heights around 1,5 m. As often in the Apocynaceae (milkweed) family to which it belongs, plant parts exude a milky sap where the surface is damaged.

The plant is found widespread across the northern and eastern parts of South Africa; also common in tropical Africa. This photo was taken north of Kokstad.

The habitat is variable, mainly moist grassland and vleis, common in disturbed patches including roadsides. The species is not considered to be threatened in its habitat early in the twenty first century.

The rhizomes are commonly dug up for use in traditional medicine. The range of ailments for which this plant serves some purpose is so wide that it approaches panacea status (Van Wyk and Malan, 1997; iSpot; ww.plantzafrica.com; http:redlist.sanbi.org).