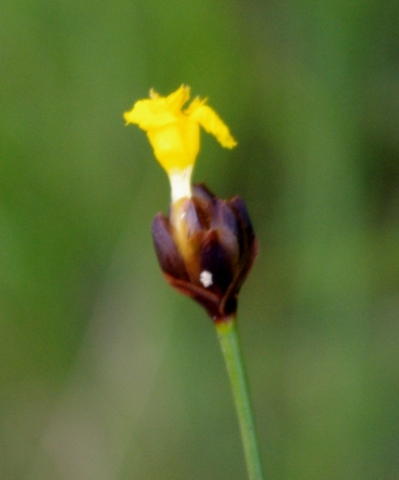 Xyris capensis is a densely tufted, grass-like perennial, a monocot that grows to heights ranging between 8 cm and 50 cm. The narrow basal leaves are erect, flat and long, arranged in a fan-shape that forms a sheath at the base around the stalk above the small, swollen rhizome.

X. capensis is found in many countries of East Asia and South America, also widespread in South Africa excluding the arid west.

The habitat is open marshy places, damp slopes and along stream banks, usually at medium to higher elevations. This plant was encountered outside Kaapsche Hoop in Mpumalanga on a rocky plateau during January. The species is not considered threatened in habitat early in the twenty first century.

The plant has no known commercial use (Van Wyk and Malan, 1997; Lowrey and Wright, 1987; www.iucnredlist.org).