Home » TYPES » Herbs » Xerophyta retinervis black stems
Back to Category Overview
Total images in all categories: 11,235
Total number of hits on all images: 5,944,731 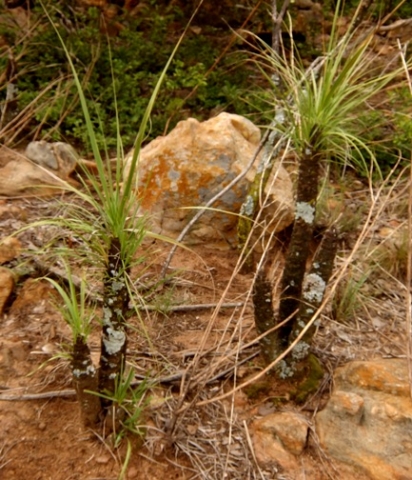 Xerophyta retinervis is a well-known plant of the rocky ridges around Pretoria and the Witwatersrand. Typically only about 60 cm tall, they occasionally reach 1,8 m. The dark, stumpy, dwarf stems are unmistakable.

Linear-lanceolate leaves, i.e. long, narrow, almost strap-shaped ones, grow in terminal tufts during the warm, rainy season. The leaf is keeled, consisting of a long grass-like upper part and the lower, persistent sheathing base.

Long roots grow from the stem, also along its entire above-ground part, finding their way down through the dry fibres of leaf-base remains into the ground. This feature characterises the Velloziaceae family of which there are five genera and 80 species in Africa, southern Arabia, Madagascar and Brazil. Only two genera and seven species occur in South Africa.

The smallest of them, X. humilis, growing in North West to Namibia, becomes 8 cm tall, its fibrous stem only half that.

These fibrous stems allow Xerophyta plants to survive the long, very dry periods that mark their habitat. The acquired, low activity mode resorted to in adversity can be abruptly abandoned: they recover within a couple of days when rehydrated, like a kind of resurrection plant (Germishuizen and Fabian, 1982; Letty, 1962; www.plantzafrica.com).