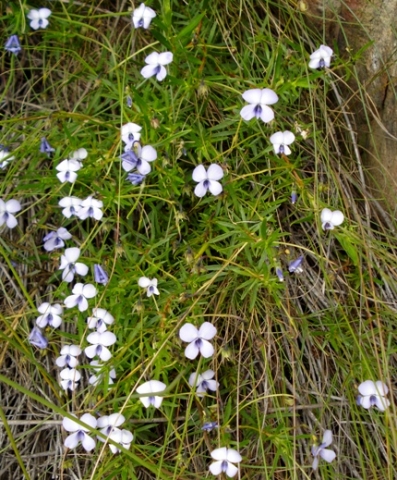 Viola decumbens, the wild violet or Cape violet, is the only member of this large and cosmopolitan genus comprising about 300 species that is found in fynbos. The most well-known garden plant of the Viola genus is the exotic, V. odorata, the pansy.

V. decumbens is a prostrate or scrambling perennial, sometimes becoming woody and reaching heights from only 8 cm to 30 cm. The specific name, decumbens, means prostrate or lying down.

This plant was photographed in Bainskloof, close to the northern limit of its distribution that also reaches Ceres and Montagu. Southwards it may be plentiful in moist and partly shaded spots from the Hottentots Holland Mountains to Bredasdorp and Swellendam.

It typically grows on damp lower sandstone slopes where the soil is sandy or rocky. This plant is not considered to be threatened in its habitat early in the twenty first century (Manning, 2007; Privett and Lutzeyer, 2010; JSTOR; iSpot; www.redlist.sanbi.org).